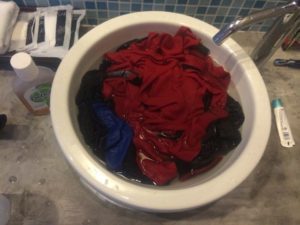 All over the Internet there are dozens of posts on Muay Thai and MMA forums of fighters going down with Ringworm and other fungal infections. Most people who have trained long enough will have come in to contact with someone else that has Ringworm and possibly had it themselves. The first time I caught it was my very first session training at ZT Fight Skool when I borrowed some gloves and got it all over my hand. Getting rid of it took over 2 weeks and killed my motivation to train! I don’t want that to happen again here so am going to be a lot more careful.

How To Prevent Ringworm

Following these simple tips can reduce the risk of you catching it.

Avoid sharing. Sounds selfish, but Ringworm is a fungus and can spread by touch, so don’t borrow or lend clothing or equipment from or to anyone. You never know what might be lurking on it!

Wash clothing and training equipment with an anti-fungal soap. Dettol is not anti-fungal, it is antibacterial.

Shower immediately after training and use an anti-fungal soap.

There are soaps out their specifically designed for fighters, e.g. Defense Soap as well as several, scientific studies, to suggest that Tea Tree Oil makes a great anti-fungal.

As I can’t find Defence Soap out here in Thailand, and my visits to the super markets haven’t produced any other specific anti-fungal soaps, as well as following the steps above I’m also using a tea tree oil based soap.

I’ve been struggling to make it through the entire of the 2 1/2 hour Muay Thai lessons, typically only managing 1 – 1 1/2 hours before I am too exhausted to continue. To compensate I started training twice a day getting in 2 – 2 1/2 hours of training in each day. Until today! As I managed to last 2 hours solid in the morning session.

I wasn’t sure why I was struggling to last more than 90 minutes, so over the weekend I decided to add more carbs to my diet and do some carb loading. Usually I just eat meat and vegetables but that probably wasn’t enough to keep me going. So I got creative.

I added brown rice to the meat and vegetable dishes and also incorporated Hawaiian pizza on a wholemeal base in to the mix. I also made sure to drink 4 1/2 liters of water on the Sunday. Normally the food I’ve been eating hasn’t been spicy at all but I ordered stir fried chicken with holy basil, took one mouthful and then picked all the chilli out of it. Don’t get me wrong, I love chillis, but this was head and shoulders spicier than anything I’ve eaten in England!

After the 90 minute mark, where I usually have to flake, the lessons get a LOT more interesting. We did about 10 minutes of pad work, where I was paired up with a trainer who held pads as I punched, kicked and elbowed them in combinations as instructed. The next 10 minutes were free form on the punch bags. Then after that we entered the ring and actual sparring took place. By this time I was completely exhausted, and had run out of water, I’d drunk over 1 1/2 liters and completely emptied my bottle .. Due to a combination of being shattered and being rubbish I think I got punched in the face about 100 times during my short sparring session, before I bailed.

If a fighter looks helpless and cannot or refuses to intelligently defend himself following a strike(s) and receives repeated blows but does not tap out or call out a signal to quit or end the bout, he may be called “out” by the official ring referee and the bout stopped if referee feels it is necessary and awarded to that fighter’s opponent.

This was basically me 😀

I fell out of the habit of taking my blood pressure daily using the [amazon text=QardioArm Wireless Blood Pressure Monitor&asin=B00JM6EBHG]. It’s kind of boring, but I took it again today to check as I do want to keep track of it.

Today’s reading showed a noticeable drop. 133/86 down from a high of 165/104 meaning I’ve gone down from Stage 2 Hypertension to Prehypertension. This is fantastic news, although I am aware that blood pressure can fluctuate massively. Hopefully as I continue this healthy life style it will enter the Normal range.

The [amazon text=QardioArm Wireless Blood Pressure Monitor&asin=B00JM6EBHG] is really good, but I have to make sure not to move my arm or hand at all whilst I make the reading. If I do it pops up with a warning saying it has to retake my blood pressure. I imagine this is the same with all blood pressure monitors but for some reason at the doctors I’m less inclined to move around!