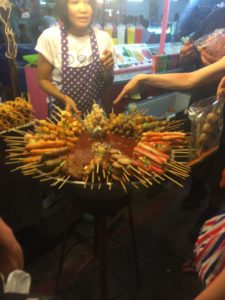 The Taled Kaset Phuket Night Market is the largest night market in Phuket, loaded with food from different cultures as well as hilariously cheap knock off goods.

The first part of the market was rows and rows of little stalls and cubby holes selling either cheap Thai or tourist clothing, or cheap knock off sunglasses or other random things. e.g. the Beats by Dre Pill is £170 or you can buy something that looks exactly the same for about £17. For some reason Beats by Dre is HUGE over here and fake/cheap stuff is everywhere, even in the normal more expensive shopping malls. You can even buy fake Beats branded speakers in styles that even Beats by Dre don’t make!

There was also lots of art work, images of famous people with quotes, the usual cheap sunglasses (and they WERE cheap!), fishing equipment (that made me feel quite nostalgic!), knock off DVDs, etc.

When you get out of the clothes stalls the rest of the market is dedicated to food, all the food! Walking around in a group of 7, our pace was slow, as someone always wanted something from one of the stalls. Whether it was fish balls, meat on a stick, spicy papaya salad, ice cream, pancakes, bubble tea, sushi, omelettes, anything, it was all available and all eaten as we went!

As well as normal Thai, Chinese, Japanese and Muslim cuisine, the market also features stalls that sell insects. Grasshopper, crickets, silkworms, beetles, frogs, all manner of creepy crawlies, although I didn’t spy any spiders or scorpions.

After approaching the stall I rapidly lost my bottle, but then I saw a small Thai girl ask her dad for a bag of crickets as a snack. I’ve had crickets covered in chocolate before so thought why not and ordered a bag. For 30 Baht (£0.60) the lady ladled a handful of crickets in to some boiling sesame oil for about 5 seconds, drained the oil from them, funnelled them in to a bag then poured some spice mix on top before handing them to me.

It was kind of weird having to look in to the bag to fish one out with the chopsticks as all the crickets had faces. The texture was definitely crunchy, and I got a leg stuck between my teeth. It was like eating dry bran flakes with a salty, sesame and chilli kick I guess.