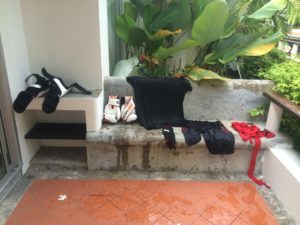 Is Dettol. You can smell it everywhere like cheap perfume or aftershave and it’s an instant giveaway that someone is training in one of the many fight camps along the road. It’s a necessary evil though as it’s recommended to wash all clothes and training equipment in Dettol or another anti-bacterial solution in order to reduce the spread of staph or ringworm infections. Not only is this a good idea for health reasons, it helps with my travel light policy as I’ve been hand washing the same couple of sets of clothes daily for the past week 🙂 We’ve also been given Dettol anti-bacterial soap to wash ourselves with!

After having to ditch Tiger Muay Thai’s cross training lesson half way through I decided to try their Muay Thai next. I still haven’t shifted this jet lag and am basically sleeping on UK time so made the 16:00 lesson, rather than the intended 08:00 lesson 🙁 Arriving 5 minutes early, the class had all ready started so I jumped in to a 5 minute stretching session, next came 15 minutes of running laps round the training area mixed up with all the usual exercises you’d encounter in most other martial art environments, shadow boxing, arm raises, heals to hands, side steps in and out etc. fortunately we weren’t asked to run doing knees to chest as that sucks!

Next up it was time to gear up. I had no idea how to do my hand wraps so like half of the class the instructor did it for me, then it was shin pads and gloves on for a drill session. Left elbow, right elbow, right kick, right knee, left knee, lean back, step left, forwards, step right, backwards, right block, left block, turn, upper left elbow, over and over again as the instructor shouted out moves. Whilst performing each move several other instructors were moving around the class, judging technique and tweaking where necessary which was really helpful. I think there were 4-5 instructors to the class in total. After a water break it was shadow boxing time, which was essentially the same thing just on our own time, and again the instructors were more than happy to assist with technique. Also one side of the wall is mirrored so you can check out what you’re doing. After the drills we split off in to pairs and practiced various kicks and blocks, again the instructors were awesome and helped out when necessary.

At 50 minutes in I was dyeing so after several back to back breaks and sips of water I realised that yet again it was time to leg it to fight another day. As I was sorting myself out to leave I had a chat with the instructor who was ok with it and encouraged me to come tomorrow for the 8:00 class. If I can I will, but I seem to fall asleep around 6:00 Thai time, or 00:00 UK time, I am trying to fix that 🙁 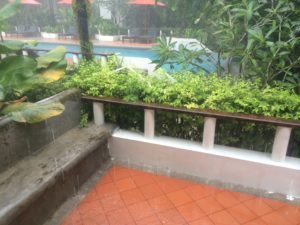 It’s monsoon season here at the moment, and whilst sometimes it’s so hot you just sweat buckets, there’s very little sunshine as it’s always overcast so I generally haven’t had to wear sunscreen, though I’m sure that will change. On Saturday it was proper windy and raining and the hotel suffered some damage to it’s red parasols!

As whined about else where, I still haven’t managed to shake this jet lag yet. This is really starting to great as the only yoga class is 6:30 and that’s around the same time I fall asleep. It also means I’m not able to take advantage of Tiger Muay Thai’s excellent meal plan, that I’ve already paid for. E.g. today I woke up at 12:00, had breakfast at the Signature Phuket hotel at 13:00, then had dinner #1 at Tiger Muay Thai at 18:00 and then dinner #2 just 1 hour later at 19:00. Not ideal.

A similar thing happened yesterday, but Tiger Muay Thai’s grill closes at 16:00 on a Sunday so I ordered something comparable from the hotel instead. 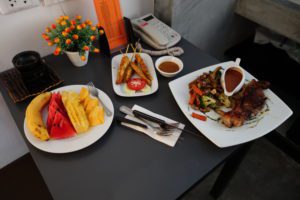 I need to get a grip on the jet lag though as not only am I missing training classes, it’s also costing me money due to the additional food!